The perfect roast dinner as voted by the British public revealed!

The leaves are falling, the temperature is dropping and jumpers start to reappear in wardrobes. This means one thing for Brits - it’s time to reintroduce the roast dinner! (We do acknowledge that there is a proportion of the population that continue to eat roasts even in 30 degree heat however.)

Roast dinners are a staple part of British culture, especially during the colder seasons. So, as the nights get longer and the days shorter, we decided to do some digging to find out, not only what the perfect roast dinner comprises of in the UK, but what weird and wonderful items you’ve eaten with one, and whether condiment sauces like ketchup should be anywhere near your Yorkshire pudding or roast potatoes.

Although insight into the country’s roast dinner preferences is invaluable, we wanted to add some value, so collated the top rated roast dinners from every corner of the UK.

We used TripAdvisor and Google Reviews data to find the total number of 4.5+ star rated roast dinners, then to make it fairer for the smaller towns, cities and villages, we calculated the number of top rated roasts per 100,000 people.

Maybe a surprise to some, Canterbury came out as the nation’s ‘roast capital’, followed by Newquay and Norwich, while Birmingham and London didn’t even make it into the top 25…!

When it came to our survey of 10,000 Brits, we managed to identify some truly quirky roast dinner habits as well as what items you just can’t be without. Please read on for the full research!

The five most important roast items, and the percentage of the British public who selected them, are: 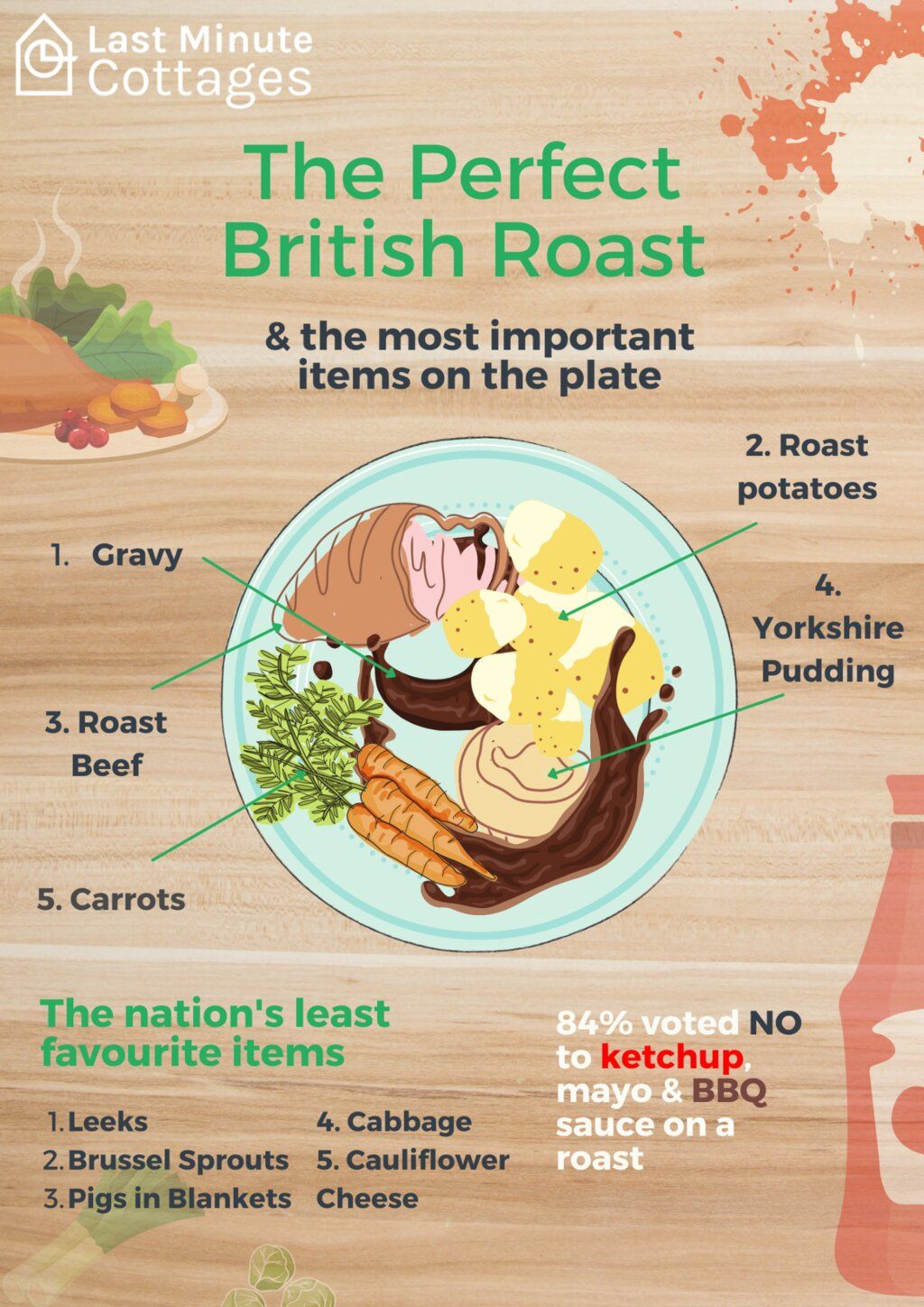 The five least important items, and the percentage of the British public who selected them, are:

The weirdest items you’ve eaten with a roast dinner:

The majority (84%) of our respondents voted NO to ketchup, mayo or BBQ sauce being eaten with one.

When it came to which meat the nation loved the most on their roast, Beef was at the top, with nearly two fifths (39%) of the votes, followed by Ham and Chicken, both of which were selected by 21% of respondents.

Should roast dinners only be eaten on Sundays or holiday days like Christmas day?

90% said no! Looks like us Brits love a mid-week roast

Where should gravy go?

The majority (84%) agree that gravy should go everywhere

And maybe the most controversial insight yet, when asked should pigs in blankets be eaten all year round with a roast, Brits voted no, but only by a margin - it was 55% to 45%! This might still be up for debate for a while...

“Although the festive season is still a good couple of months away, the cold weather has already begun to creep in, and people are once again beginning to crack open the tins of tomato soup, dust off their winter jackets, and get back into the rhythm of the weekly Sunday roast. So, we decided it was time to find out what a British roast dinner looks like and where in the UK you’ve got the best chance of eating a top-rated one.

“It was interesting to see Canterbury at the top of the list and London at the bottom, however when you look at the number of top-rated-roasts per 100,000 residents, it’s clear London just doesn’t have enough to go around! Our survey also threw up some surprises - nearly half of people don’t think pigs in blankets should be an all-year-round item - all I can say is I know which side of the fence I sit on…”

This site uses cookies to provide you with a better user experience. By using Snaptrip you accept our use of cookies.